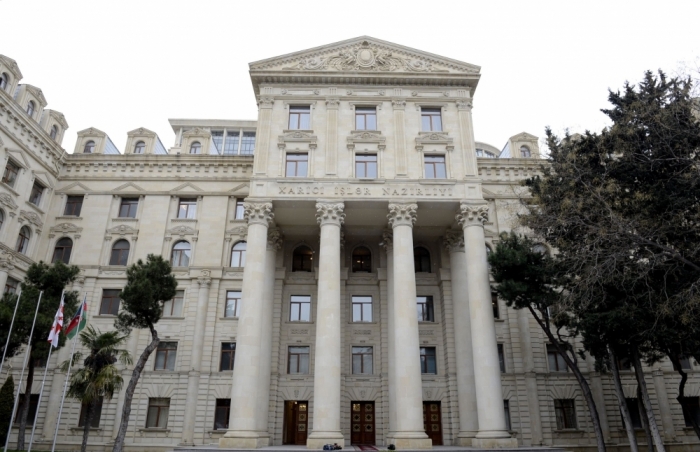 SHARE: READ: 113     10:11     08 November 2021
A zerbaijan’s Ministry of Foreign Affairs has issued a statement on the occasion of November 8 – the Victory Day in Azerbaijan. The statement reads: “On November 8, 2021, Azerbaijan celebrates Victory Day, which has become a celebration of the strength of our people and of our national pride, and is of exceptional importance for the honour and future development of our state. As a result of the 44-Day Patriotic War, which began on September 27, 2020 in response to a provocation and further military aggression of Armenia, Azerbaijan liberated its lands from occupation, and in accordance with the related UN Security Council Resolutions, as well as numerous decisions and resolutions of other international organizations, Azerbaijan’s territorial integrity within its internationally recognized borders was ensured, and the right of about one million Azerbaijani IDPs to live in their native homes has been restored. As a result of the 44-day long military operations, under the leadership of the victorious Commander-in-Chief, President Ilham Aliyev, the heroic Azerbaijan Army liberated more than 300 settlements, including the cities of Jabrayil, Fuzuli, Zangilan, Gubadli, as well as Shusha city, which has a special place in the history and culture of the Azerbaijani people. A Trilateral Statement signed by the leaders of Azerbaijan, Russia and Armenia on November 10, 2020 has brought an end to the military operations, and Armenia, recognizing its defeat, withdrew its armed forces from Kalbajar, Aghdam and Lachin districts. Thus the conflict was resolved through military-political means. After the war, Azerbaijan faces the important task of rebuilding and restoring, as well as of demining of the liberated territories. At the heart of this work is to ensure the safe and dignified return of Azerbaijani IDPs to their homes, whose fundamental rights have been violated for decades. In this process, which requires time, finances and serious efforts, Azerbaijan is not alone, friendly and partner countries are participating in the revitalization of the liberated territories. In the coming years, we will witness the return of the first IDPs to their homes. Azerbaijan has taken appropriate steps to investigate illegal actions, violations of international law, war crimes, urbicide, culturicide and ecocide committed by Armenia within the framework of its nearly 30 year-long policy of aggression, as well as to bring to justice those responsible for these violations, and these steps will continue at the next stages. Punishing the perpetrators and ensuring justice are important in terms of preventing a recurrence of such cases in the future. Ensuring lasting peace, development, and progress is the basis of Azerbaijan’s vision for the future. After the elimination of the factor of occupation of its territories, Azerbaijan is ready to normalize relations with Armenia on the basis of strict adherence to the principles of international law, in particular, the principles of sovereignty, territorial integrity and inviolability of international borders. In order to ensure future peace and security in the region, it is important at this stage to fully implement the trilateral statements, and Azerbaijan expects Armenia to reciprocate the steps taken by Azerbaijan in this direction. With the end of the conflict, new realities have emerged in the South Caucasus region, and everyone must accept these realities. Armenia must choose between regional cooperation and illegal, as well as unfounded territorial claims against its neighbors. The international community must play a positive role in this regard and call on Armenia to realize that there is no alternative to peace. Attempts to directly or indirectly support revanchism and its armament in Armenia must be stopped. November 8 - Victory Day is a celebration of international law and justice, forming a glorious page in the history of the Azerbaijani People. On this important day, we remember with deep respect and esteem the memory of all our Martyrs who gave their lives for the independence, sovereignty and territorial integrity of Azerbaijan.”
bakutribune.com
VIDEO