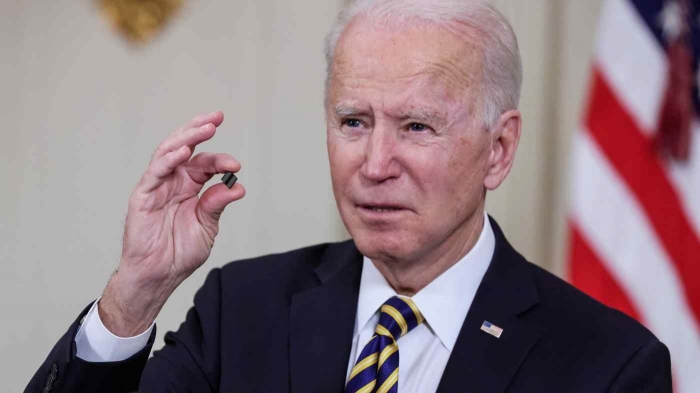 SHARE: READ: 193     11:28     23 September 2021
U S President Joe Biden sought on Tuesday to rally the international community to meet the escalating crises of our age, telling world leaders "we cannot afford to waste any more time." Biden spoke to a number of pressing challenges faced by the global order, maintaining the US will "do our part" to meet them, but the world would be more "successful and more impactful if all nations are working toward the full mission to which we are called." "As a global community we are challenged by urgent and looming crises where lie enormous opportunities if, if we can summon the will and resolve to seize these opportunities," he said during the 76th General Assembly, placing special importance on questions posed by the coronavirus pandemic and the mounting ravages of climate change. “How we answer these questions, in this moment, whether we choose to fight for our shared future or not, will reverberate for generations yet to come. Simply put, we stand, in my view, at an inflection point in history," he said. The US president emphasized the US is not seeking to enter a new Cold War with China "or a world divided into rigid blocs" as tensions continue to mount, most recently regarding Biden's decision to help Australia acquire a nuclear-powered submarine fleet. "The United States is ready to work with any nation that steps up and pursues peaceful resolution to shared challenges even if we have intense disagreements in other areas, because we’ll also suffer the consequences of our failure if we do not come together to address the urgent threats like COVIV-19, and climate change, or enduring threats like nuclear proliferation," he said. Just minutes before Biden took to the rostrum, UN Secretary-General Antonio Guterres continued to raise alarm about the great power competition between Washington and Beijing, saying it is threatening to divide the world in two. Guterres said he fears the world is heading toward "two different sets of economic, trade, financial and technological rules; two divergent approaches in the development of artificial intelligence, and ultimately, the risk of two different military and geopolitical strategies.” "This is a recipe for trouble. It would be far less predictable than the Cold War," he added in a reference to decades of tensions between the US and the Soviet Union that dominated the latter half of the 20th century. Biden further dashed authoritarian governments the world over, saying they are stifling the wills of their people and would ultimately fail to end the age of democratic governance. He pledged to ensure they could not use technological developments such as 5G "to suppress dissent, or target minority communities," a likely reference to Beijing. "The future will belong to those who unleash the future of their people, not those who stifle it. The future will belong to those who give their people the ability to breathe free, not those who seek to suffocate their people with an iron hand," he said. "The authoritarians of the world may seek to proclaim the end of the age of democracy, but they’re wrong. The truth is the democratic world is everywhere," he added. As the US looks back on its longest conflict, the 20-year war in Afghanistan that ended last month, Biden said the US must recalibrate how it uses its military power to ensure it is only a "tool of last resort" and should not be used to answer "every problem we see around the world." "Today, many of our greatest problems cannot be solved, or even addressed, through the force of arms. Bombs and bullets cannot defend against COVID-19 or its future variants," he said. On the Israeli-Palestinian conflict, Biden continued to maintain faith in a two-state solution, saying it is "the best way to ensure Israel’s future as a Jewish democratic state, living in peace alongside a viable, sovereign and democratic Palestinian state" while acknowledging the lack of diplomatic momentum toward that goal. "We’re a long way away from that goal at this moment, but we must never allow ourselves to give up on the possibility of progress," he said.
bakutribune.com
VIDEO