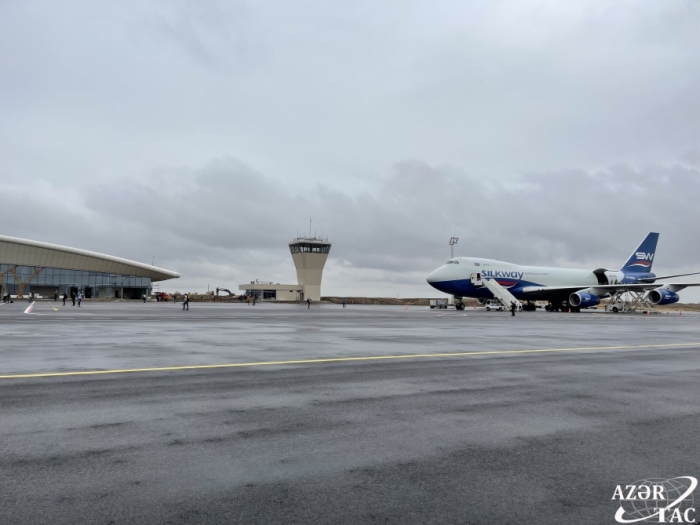 SHARE: READ: 284     12:19     05 September 2021
B efore the final commissioning of the Fizuli international airport, the largest passenger plane belonging to Azerbaijan Airlines AZAL - Airbus A340-500, which took off from Baku on a test flight, landed at the first airport of liberated from the occupation of Karabakh. According to AZERTAC, this plane symbolically bears the name "Karabakh". In addition, one of the largest cargo planes, Boeing 747-400, belonging to the Azerbaijani Silk Way airline, has also landed at Fizuli airport today. This plane for the first time delivered cargoes to Karabakh by air. The flight time on the Baku-Fizuli route by a passenger plane was 35 minutes. A runway with a length of 3000 meters and a width of 60 meters was put into operation at Fizuli International Airport. The runway is fully equipped with instrumental landing and navigation systems, lighting, primary and secondary radar systems to ensure flight safety in accordance with all the requirements of the International Civil Aviation Organization (ICAO). This will allow the airport to accept any type of aircraft. The platform area is 60 thousand square meters. The construction of an air traffic control (ATC) tower equipped with automated systems was completed. This will allow starting flights to Fizuli airport in accordance with ICAO and International Air Transport Association (IATA) standards. To ensure full control of the air navigation system and flights over the liberated territories, new international air routes are being introduced. The main transformer substations and power transmission lines are also ready to provide electricity for the future airport complex. The construction of boiler houses and other auxiliary premises has been completed. A parking lot for 150 cars has been built in front of the passenger terminal, which is scheduled for commissioning at the end of September. Also, the construction of a road connecting the Fizuli international airport with the Victory Road and the main road leading to the city of Shusha continues. In addition, greening works are being carried out on the territory of the air harbor. Note that also on behalf of the head of state, the construction of international airports in Lachin and Zangilan regions continues.
bakutribune.com
VIDEO