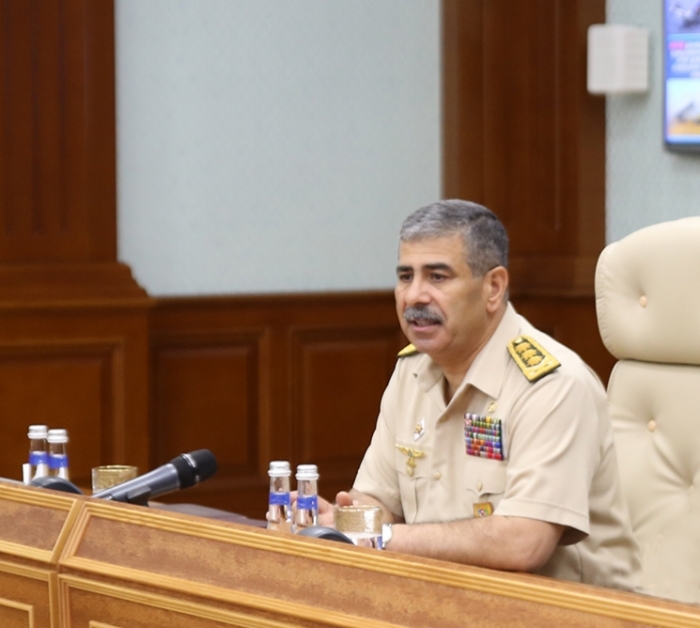 SHARE: READ: 44     12:21     19 July 2021
A zerbaijan`s Minister of Defense, Colonel General Zakir Hasanov has held an official meeting at the Central Command Post, the Ministry of Defense told Baku Tribune. Deputies of Minister of Defense, Commanders of types of troops, Chiefs of Main Departments, Departments, and Services of the Ministry attended the meeting. Commanders of the Army Corps and formations stationed in the liberated territories, as well as other officers were also involved in the meeting held via video communication. The minister of defense brought to the attention of the meeting participants President of the Republic of Azerbaijan, Supreme Commander-in-Chief of the Armed Forces Ilham Aliyev’s statement that “The war is over. Nevertheless, we are ready and must be ready for war at any moment", and stressed the importance of increasing the level of moral-psychological and combat training of military personnel. The minister instructed to increase the vigilance of servicemen taking up combat duty, and to enhance the logistics possibilities of units. Analyzing the latest situation in the liberated territories, including on the Armenian-Azerbaijani state border, Minister Hasanov noted that Armenia bears responsibility for the escalation of tension. The minister gave instructions to the command staff in regard with the suppression of possible provocations of the Armenian armed forces. Inquiring about the progress of engineering work and engineering support of troops, Colonel General Hasanov gave relevant directives to improve service and combat activities.
bakutribune.com
VIDEO