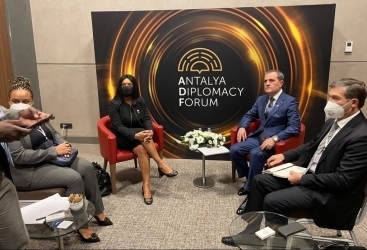 SHARE: READ: 60     16:06     19 June 2021
A zerbaijan`s Minister of Foreign Affairs Jeyhun Bayramov has met Minister of Foreign Affairs and Communities of Guinea-Bissau Suzi Carla Barbosa on the sidelines of the Antalya Diplomacy Forum, Baku Tribune reports citing Azertag. The sides discussed prospects for the development of bilateral cooperation and collaboration within international organizations. The FMs hailed the current level of relations between Azerbaijan and Guinea-Bissau based on mutual respect and support, and stressed the importance of high-level reciprocal visits in terms of further expanding relations. During the meeting, the sides also exchanged views on the current situation in the region, the implementation of trilateral statements, and the recent tensions on the border. Minister Jeyhun Bayramov underscored Armenia's aggression against Azerbaijan, unconstructive approach to resolving the conflict over the past 28 years, the war crimes and crimes against humanity committed by this country during the 44-day war, including crimes against the civilian population of Azerbaijan. Speaking about the post-conflict phase and the current situation in the region, FM Bayramov informed Suzi Carla Barbosa of the situation in the liberated areas, the threat of landmines in these areas and their effects, the ongoing restoration and construction works, and future development plans. Suzi Carla Barbosa praised the cooperation between the two countries in the framework of international organizations, noting the successful implementation of cooperation in both bilateral and multilateral formats. The sides also had a broad exchange of views on regional and international issues of mutual interest.
bakutribune.com
VIDEO