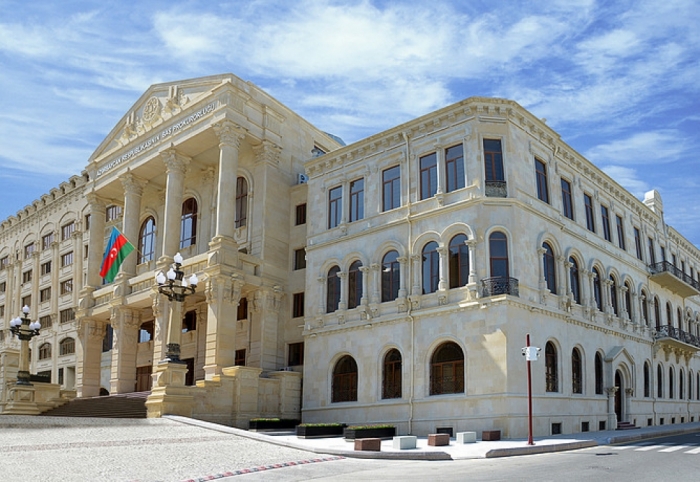 SHARE: READ: 339     13:52     18 June 2021
T he Prosecutor General's Office of the Republic of Azerbaijan continues to take necessary measures to expose the aggressive nature of the Republic of Armenia, which has turned terrorism into one of the main tools of its aggressive policy supporting terrorism at the state level, Baku Tribune reports citing Azertac. Thus, the information published in a number of media outlets and social networks on the illegal transportation of a large amount of weapons and military equipment to the Republic of Armenia, and from there smuggled to the Nagorno-Karabakh region of Azerbaijan has been investigated by the Prosecutor General’s Office of Azerbaijan. The investigation established that Head of “Tashir” group of companies, engaged in business activities, Karapetyan Samvel Sarkisovich, known in Armenia as "Grey Businessman" and owner of “Royalsys Engineering” Company David Galustyan, General Director of “KOMEX” Company Abramyan Ara Arshavirovich and others in order to supply the Armenian Armed Forces with weapons, ammunition, explosives or military equipment at various times during 2001-2021, in violation of the requirements of the Customs Convention on International Cargo Transportation and the Treaty on the Limitation of Conventional Arms in Europe, by passenger planes flying in different directions, by IL-76 TD cargo aircraft of the Armenian Air Force, and by ILYUSHIN-76TD cargo aircraft purchased by Ara Abramyan – at the expense of the allocated funds illegally obtained large-caliber firearms, ammunition, explosives and devices for military purposes, and arranged smuggling to the Republic of Armenia and Nagorno-Karabakh and adjacent districts of the Republic of Azerbaijan occupied by Armenia. On April 28, 2021, the Prosecutor General's Office initiated a criminal case under the relevant articles of the Criminal Code, and the investigation was entrusted to the Investigation Department. For the acts above Karapetyan Samvel Sarkisovich, David Galustyan and Ara Abramyan were charged under Articles 100.1, 218.1, 228.3, 279.1, 206.4 of the Criminal Code, and put on the International wanted list. By court decisions arrest as a measure of restraint was chosen against them. In connection with the above-mentioned criminal case, legal assistance requests have been addressed to the relevant state agencies of foreign countries. The Prosecutor General's Office states that all possible measures are being taken to bring the perpetrators of these and other similar crimes to justice in accordance with international law.
bakutribune.com
VIDEO