Will Erdogan's visit to Azerbaijan become the beginning of a new era in the region? 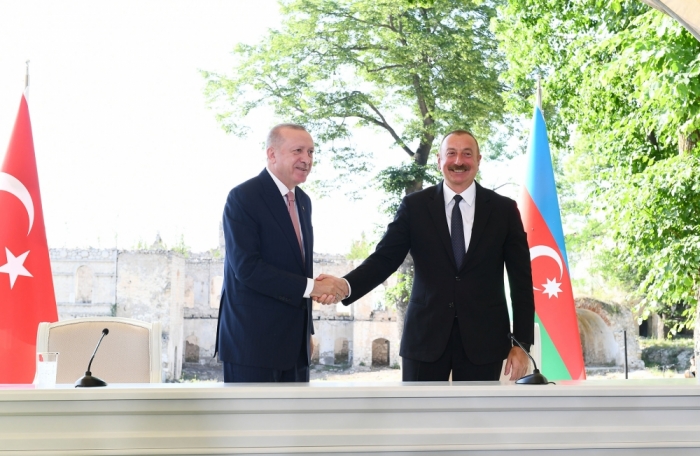 SHARE: READ: 1273     23:40     17 June 2021
S o the historic visit of the Turkish President and his substantial delegation came to an end. The visit became memorable primarily by signing of the Shusha Declaration. Many local experts focus exclusively on the military component of this declaration (which is, of course, important), but there are other interesting points. Some argue that the military component enshrined in the Shusha Declaration was already reflected in the 2010 treaty, which is partly true, however there is one important point: Turkey in 2010 and Turkey in 2021 are actually 2 different states in terms of their geopolitical weight and influence. Azerbaijan has now also a completely different status. To some extent, the Shusha Declaration could be considered an expansion and strengthening of the 2010 agreements. It is also important that the declaration touches upon issues of media cooperation, in a situation when a permanent information war is being waged against Turkey and Azerbaijan. It is of paramount importance to build up and improve information and informational counteraction potentials. The events of 1915 in the Ottoman Empire, which are presented by Armenian and pro-Armenian circles as the "Armenian Genocide", were also discussed. This is an important element of the information war against Turkey and Azerbaijan, and coordination of efforts in this area is required. The declaration also reflected the issues of further consolidation of the Turkic world. We live at a time when the old world order established on the basis of the outcome of the Second World War is crumbling, and the new one has not yet been created. In such a situation, consolidation and enhancement of cooperation between the Turksoy member states is very important. Also, in this situation, a military alliance between one of the strongest armies of NATO and one of the strongest armies among the countries of the former USSR is important (according to some experts, the Armed Forces of Azerbaijan are second in power only to the Armed Forces of Russia). An important result of the visit is also the decision to open a Turkish consulate in Shusha. In near future, Shusha will play an important role not only as a cultural and historical, but also as a political center in the South Caucasus, at the same time the world and our unfortunate neighbors will have a unique chance to observe what a creative power is. I would also like to draw your attention to the statements of the Turkish President about possible joint activity of Azerbaijani SOCAR and Turkish TPAO. In light of discovery of large oil and gas reserves in the Mediterranean and Black Seas, as well as Turkish activity in Libya and Syria, SOCAR-TPAO cooperation can bring massive profits to both sides, and play a role in turning Azerbaijan into an extra-regional player, which I have talked and wrote about many times. I believe that by the end of this year we will be able to see some practical results of the Shusha Declaration. The author is the Middle East Analyst.
(If you want to contribute and have specific expertise, please contact us at [email protected])
bakutribune.com
VIDEO