The Shusha Protocol Cements the Alliance between Turkey and Azerbaijan 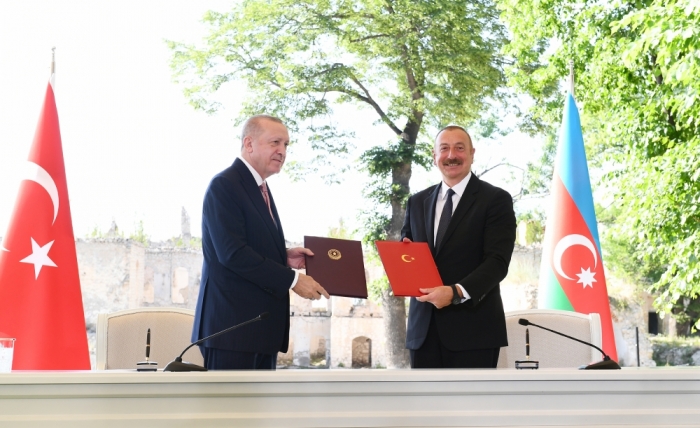 SHARE: READ: 929     23:23     17 June 2021
A zerbaijani President İlham Aliyev and Turkish President Recep Tayyip Erdoğan signed on June 15, 2021 the “Shusha Declaration on Allied Relations” in a bid to further strengthen their ties following Baku’s victory in Nagorno-Karabakh that liberated occupied Azerbaijani lands during the conflict between Azerbaijan and Armenia in late 2020. Shusha, a center of Azerbaijani culture for centuries, is important both symbolically and strategically because it sits high above the region’s nearby capital, Khankendi under the Armenian control. The Shusha Protocol is a new step to deepen the strategic cooperation between the two Turkic countries. Aliyev said the agreement was the most significant treaty since the 1921 Treaty of Kars, which established the borders between Turkey and the three Caucasus Soviet republics, Azerbaijan, Armenia, and Georgia. In the First Karabakh War in the early 1990s, Armenia occupied the Nagorno-Karabakh together with the seven adjacent provinces of Azerbaijan. More than 600,000 Azerbaijanis were displaced in the First Karabakh War. All diplomatic efforts including the OSCE (The Organization for Security and Co-operation in Europe) Minsk Group had failed to find a fair solution to the problem between Azerbaijan and Armenia. The failed diplomacy caused a second war in Nagorno-Karabakh in late 2020. President Aliyev had pursued a remarkably successful strategy for keeping the war limited within the borders of Azerbaijan and avoiding any spillover of armed conflicts to Armenia’s territory. This true approach provided international legitimacy to Baku during the Second Karabakh War in 2020. Turkey has always supported the welfare and territorial integrity of Azerbaijan since it gained independence in 1991. Turkey has closed its land borders with Armenia as a sign of its solidarity with Azerbaijan after the First Karabakh War. Ankara and Baku have developed a very deep-rooted partnership to increase their bilateral political, strategic, economic, and defense cooperation. Azerbaijan has also turned into a prosperous and dignified nation of the international community in the last three decades. The deepening economic cooperation between Ankara and Baku has been contributing to other regional countries too. Georgia is a clear example of benefiting alongside the boosting Turkish-Azerbaijani energy and transportation projects like the Baku-Tbilisi-Ceyhan oil pipeline, the Baku-Tbilisi-Erzurum gas pipeline, and the Baku-Tbilisi-Kars railway. Now, Turkey is planning to open a consulate general in Shusha in a bid to intensify Turkey’s contribution to Azerbaijan’s reconstruction of the Nagorno-Karabakh region. If Azerbaijan and Armenia sign a comprehensive peace agreement, then Turkey will take steps for the normalization of its ties with Yerevan, opening the Turkish-Armenian border to trade. An Armenian-Azerbaijani peace deal will also boost the economic cooperation in the region and put Armenia to the center for the Turkish-Azerbaijan economic cooperation. The Zangezur corridor in Armenia which will be used for a planned transportation link connecting Azerbaijan’s mainland to the exclave of Nakhichevan and onward to Turkey. Furthermore, Armenia’s inclusion to the Middle Corridor, which is a multimodal (land/sea) transport route connecting China and Europe, will help to increase connectivity in the region. There are efforts to increase compatibility between the Middle Corridor and China’s Belt Road Initiative (BRI). A final peace deal between Baku and Yerevan makes Beijing more eager to invest in Caucasian infrastructure, energy, and telecommunication projects. Turkey also calls for a regional peace and stability initiative with the participation of six countries, including Turkey, Azerbaijan, Georgia, Russia, Iran, and Armenia. The lack of a unique regional mechanism in the Caucasus makes it impossible to find intra-regional solutions to existing problems. If this Caucasian initiative comes through, it will be helpful to diminish differences between regional countries. Increasing regional dialogue will also bolster economic cooperation and intra-regional trade too. The war is over. Now, it is the time to heal wounds and to build regional peace, stability, cooperation, and welfare in the Southern Caucasus. The author is the Director of the Turkish Center for Asia-Pacific Studies in Ankara, Turkey.
(If you want to contribute and have specific expertise, please contact us at [email protected])
bakutribune.com
VIDEO