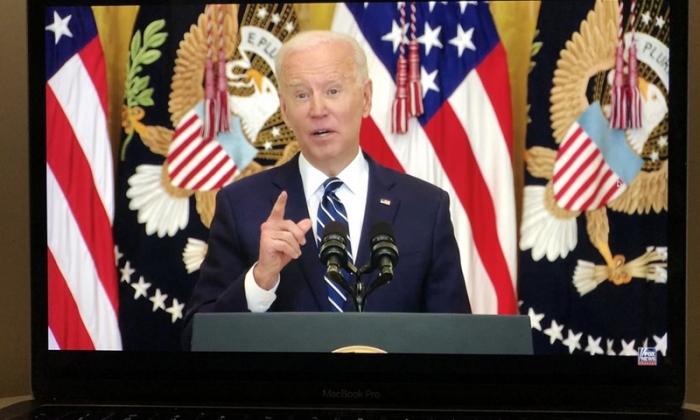 SHARE: READ: 170     11:23     02 June 2021
U .S. President Joe Biden on Tuesday announced a series of measures aimed at narrowing the wealth gap among racial groups in a speech commemorating the 100th anniversary of Tulsa massacre, one of the most atrocious racial violence in U.S. history, Baku Tribune reports citing globaltimes.cn. In less than 24 hours between May 31 and June 1, 1921, a mob of white attackers killed over 300 Black Americans in the Greenwood neighborhood of Tulsa, Oklahoma, and burned down 35 square blocks of that business district built by Black Americans -- so prosperous at the time that it was then referred to as Black Wall Street. Roughly 10,000 Greenwood residents were displaced and the community has never come close to recovering. Yet, Tulsa officials, in efforts to cover up the massacre, framed the atrocity as "riot," and the mass killings received scant mentions in media reports, school curriculum and civil and governmental conversations in the decades that followed. It wasn't until recent years that the horrendous events were eventually included in American history textbooks. "My fellow Americans, this was not a riot. This was a massacre. Among the worst in our history," Biden said in his speech as the audience rose to their feet. "Some injustices are so heinous, so horrific, so grievous they can't be buried no matter how hard people try," the president said earlier during the speech. Biden detailed a raft of policies intended to bolster homeownership and help minority-owned small businesses and entrepreneurs. The measures include using federal purchasing power to invest more money into minority-owned businesses and allocate 10 billion U.S. dollars in infrastructure funds to rebuild disadvantaged neighborhoods across the country. The first president to come to Tulsa and commemorate the massacre, Biden also plans to enhance the Fair Housing Act in ways that the Department of Housing and Urban Development will "more vigorously enforce" the law, according to a senior administration official, who added that the goal is to increase Black homeownership. Missing in the Biden initiative, however, was a plan to cancel student debt, which disproportionately affects Black students. The rollout also failed to address the issue of reparations for relatives of massacre victims, who said the federal payments could restore what was erased during the attacks. Biden in his speech also announced that Vice President Kamala Harris will lead the administration's efforts on protecting Americans' voting rights. The White House has accused the restrictive voting laws recently enacted in several Republican-leaning states of making it harder for Americans to cast their ballots. Biden on Monday proclaimed May 31, 2021, to be a "Day of Remembrance: 100 Years After The 1921 Tulsa Race Massacre." He said in the proclamation that the "Federal Government must reckon with and acknowledge the role that it has played in stripping wealth and opportunity from Black communities."
bakutribune.com
VIDEO