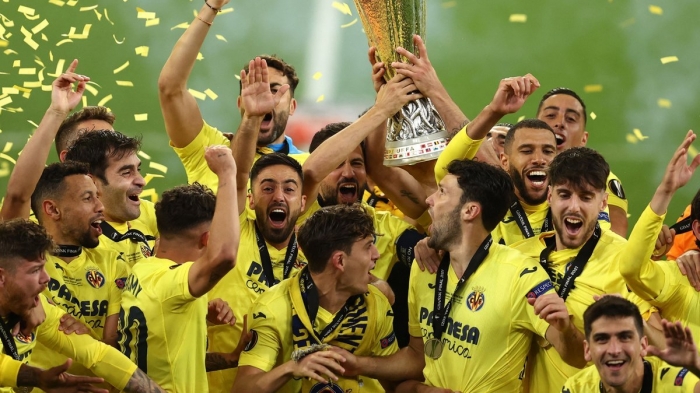 SHARE: READ: 48     11:06     27 May 2021
T he penalty shootout was going badly for Manchester United goalkeeper David de Gea in the Europa League final, beaten by every Villarreal player who stepped up to the spot, Baku Tribune reports citing skysports.com. At 11-10, it got dramatically worse. The shootout — after a 1-1 draw following extra time — went on so long that all of the outfield players took penalties, meaning De Gea and Villarreal goalkeeper Gerónimo Rulli were the 11th men up. Rulli sent his penalty into the top corner, but De Gea’s lacked power and was stopped by the Villarreal keeper. As Rulli lay on the grass after his save, the entire team ran over and piled on top of him. It was an upset to savor as Villarreal — a team from a city of about 50,000 people — secured the first major trophy in the 98-year history of the club by beating one of European soccer's giants. It also secured a lucrative Champions League spot for next season rather than playing in the new third-tier Europa Conference League after Villarreal only finished seventh in the Spanish league. And it stopped an English sweep of the two big European competitions before Chelsea and Manchester City play the Champions League final on Saturday. “It feels really good,” Villarreal midfielder Francis Coquelin said. "When you go down to the end it's the winner taking it all. It was tough, we had a tough game. Manchester put a lot of pressure on us, especially in the first half.” For Villarreal coach Unai Emery it was a record fourth Europa League title, and it offered a measure of redemption after he was fired by Arsenal last season. Emery was hoisted aloft by his players before they received their medals. He won three Europa League titles in a row with Sevilla from 2014-16 and lost the 2019 final with Arsenal against Chelsea. “We worked hard this season and I think we deserved to win and to do something important,” Emery said. “We are going to enjoy each moment but above all we are going to prepare for the next season to prepare in the Champions League and have this opportunity with very big teams.” Villarreal's win also ensured that United went a fourth consecutive season without a trophy for the first time since the 1980s and left its manager Ole Gunnar Solskjaer still looking for his first title. United's last silverware was the Europa League in 2017. “That’s football for you. Sometimes it’s decided on one kick and that’s the difference between winning and losing,” Solskjaer told broadcaster BT Sport. “Got to ... taste this feeling and make sure you don’t get it again.” Asked if United's season — runner-up in the Premier League and now the Europa League — could be considered a success, Solskjaer said bluntly: “No.” The marathon shootout had more excitement than the entire 120 minutes of the game. United dominated the early possession but it was Villarreal which made the breakthrough. Gerard Moreno pushed past Victor Lindelöf at a free kick in the 29th minute and strained to prod Daniel Perejo's cross past De Gea in the United goal. United equalized at a set piece when Edinson Cavani reacted quickest to knock the ball in after Marcus Rashford's low shot was deflected following a corner. A video review ruled the Uruguayan onside for his sixth goal of the season in the Europa League, all of them in the last four games. United could soon have had a second, if not for Rashford scuffing a shot wide when one-on-one with Rulli. Another missed chance followed when Torres blocked a Cavani header. When the game went to extra time, United's hopes of repeating a 2-1 come-from-behind win over Bayern Munich 22 years ago to the day in the Champions League final began to fade. Villarreal looked the fresher team in extra time as Solskjaer — the substitute goal-scoring hero in 1999 — held back all but one of his substitutions until the second half of extra time. Solskjaer brought on two penalty specialists, Juan Mata and Alex Telles, for the shootout. They both scored but that meant little against Villarreal's perfect 11 penalties from 11 players. Rulli had come close to saving a couple of previous penalties, including when Luke Shaw’s kick eased in over his outstretched hand. De Gea seemed to try mind games. He approached some opponents to talk to them as they prepared to shoot, and made Villarreal’s 10th penalty taker, Pau Torres, wait while he strolled over from the sideline. But in the end it was De Gea who had to trudge back toward his teammates to be consoled after his miss.
bakutribune.com
VIDEO 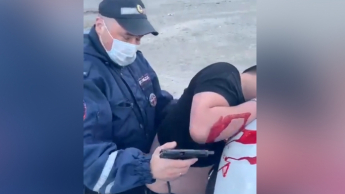