Azerbaijan-Georgia relations after the war of 2020 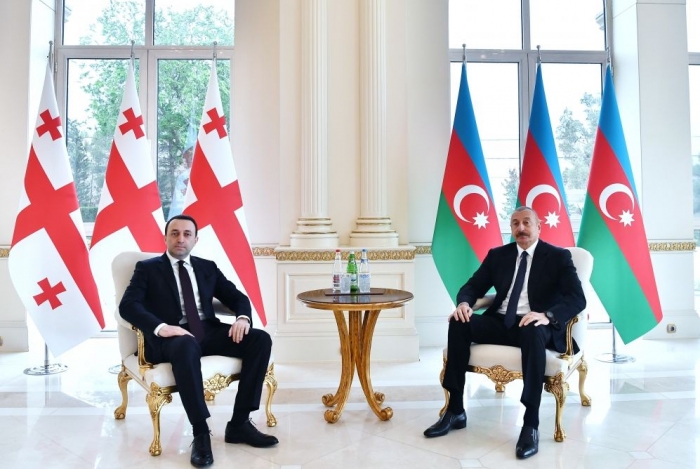 SHARE: READ: 444     20:56     24 May 2021
A fter the end of the Second Karabakh War, the geopolitical situation in the South Caucasus changed dramatically and, as a result, new opportunities appeared for the development of the region's geo-economic potential, especially in the implementation of new transcommunication projects and initiatives. Azerbaijan has advanced to the position of a regional leader, and in this regard, the further development of relations between Azerbaijan and Georgia seems to be especially interesting. First of all, I would like to note that, since 1998, Georgia and Azerbaijan have become strategic partners and geo-economic allies in the implementation of such important energy security projects as Baku-Tbilisi-Ceyhan, Baku-Tbilisi-Erzurum and Baku-Tbilisi-Supsa and in implementation of the Baku-Tbilisi-Kars trans-regional highway. Both countries are members of the Organization for Democracy and Economic Development - GUAM since 1997. It is important to emphasize the fact that the strategic alliance, which later grew into a bilateral military-political bloc, was formed between the Democratic Republic of Georgia (DRG) and the Azerbaijan Democratic Republic back in 1919. Given such deep roots of cooperation and allied relations, it is difficult to imagine what could prevent the two states from maintaining such fraternal relations, especially after the processes that began to occur after the events of November 2020. This factor of strategic friendship between peoples and countries was recorded during the official visit to Baku of the Prime Minister of Georgia Irakli Garibashvili on May 5, 2020. The prime minister noted that Azerbaijan and Georgia jointly implemented historical projects of great importance and, in turn, directly stressed: "Therefore, we are determined in our desire to continue the joint implementation of a larger number of projects that will strengthen our relations and brotherhood." This visit was the first official visit within the framework of regional politics, after that Irakli Garibashvili became the head of Georgia (after the adoption of the new constitution of Georgia in 2019, the country switched to a parliamentary form of government, it is the prime minister who is the head of state). It was after this visit that almost all the controversial issues that were artificially inflated and are still inflated by the opponents of friendship between the two states came to an end. So in the future, such warm, friendly and mutually beneficial relations will remain and will be strengthened, especially after the launch of the giant Trans-Anatolian Gas Pipeline project worth $ 9.2 billion. The two countries also have common national interests, for example, Georgia has always supported, supports and will support the territorial integrity of Azerbaijan, like Azerbaijan. In addition, Georgia and Azerbaijan have common geopolitical challenges in the context of the infringement of the state sovereignty and integrity of the country. Based on the strategic relations between our countries, we can single out some important geopolitical and geo-economic areas where mutually beneficial cooperation is possible. Such directions can be considered as follows: First, the creation of free economic zones on the border between the states and the increase in direct investment in the economies of both countries. Secondly, close cooperation in the field of the military-industrial complex (for example, the joint development of various types of weapons). Third, coordination and close cooperation in protecting the territorial integrity and sovereignty of our countries, and protecting our national interests in the international arena within the framework of international state organizations such as the OSCE, UN, Council of Europe, etc. Fourth, the creation of joint ventures to stimulate specific economic projects. Fifth, the resumption of the work of the border delimitation commission and the solution of controversial issues on a mutually beneficial basis. As for the controversial issue regarding the monastery complex "David Gareji", this issue requires a cautious approach. It is necessary to resume the work of the relevant commission not only with the participation of representatives of the relevant state structures, but also experts in the field of history, cultural studies, international law, and political scientists. Each controversial issue must be resolved in a comprehensive manner, within the framework of acceptable positions on both sides. The author is the ex-chief state adviser to the president of Georgia on regional security in the Caucasus, Doctor of Political Science, Professor.
(If you want to contribute and have specific expertise, please contact us at [email protected])
bakutribune.com
VIDEO