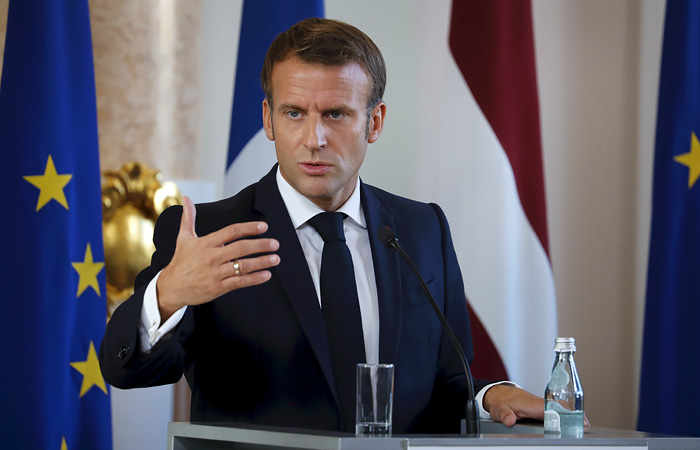 SHARE: READ: 144     10:08     07 May 2021
A day after the US-backed a decision to waive intellectual property protections for COVID-19 vaccines, the French president Thursday came out in full support for the lifting of patents to accelerate global production of vaccine doses to fight the pandemic. “I am very much in favor that there is indeed this openness in intellectual property,” Emmanuel Macron said, adding that the issue was the one of transfer of technology and know-how, not a transfer of intellectual property. France and other EU countries, which are home to large pharmaceutical giants have, however, opposed a December 2020 proposal by India and South Africa at the World Trade Organization (WTO) to waive certain provisions of Trade-Related Aspects of Intellectual Property Rights (TRIPS) for COVID-19 vaccines and other medical products. The proposal is backed by more than 100 mostly developing countries to lift the licensing requirements on patents until there is widespread vaccination globally and the majority of the world’s population has developed immunity. The waiver will enable the scaling-up of domestic production in developing countries, providing the timely and unhindered supply of affordable medical products to the patients. On Wednesday, the US administration agreed to negotiate in favor of the TRIPS waiver proposal at the WTO. Macron did not allude to changing France’s stand on the WTO proposal. In a media interaction during the inauguration of a Porte de Versailles vaccine center in Paris, he said in reality the bottlenecks that make access to vaccines difficult are related to technology transfer and the capacity to produce as well as price and access to intellectual property. “You can transfer intellectual property rights to pharmaceutical manufacturers in Africa, but they are not in the form to produce messenger RNA. Your subject is to transfer technology, know-how so that there are platforms that produce messenger RNA vaccines in Africa,” Macron explained. He stressed that COVID-19 vaccines should be made a global public good and argued that rich countries should instead prioritize donating to poor countries. Countries in Europe, followed by the UK, the US, and others, need to prioritize the spirit of solidarity and efficiency and donate doses, which in the short term will accelerate vaccination, he added. Macron recalled his appeal made at the virtual G7 summit in February to deliver to vaccinate all caregivers in Africa and to partner with poor countries in Africa, Latin America, South Asia, and the Pacific to enable technology transfer of the vaccine and finish production. His statement was criticized by the left-wing politicians who recalled that France voted against the TRIPS agreement at the WTO. Senator Adrien Quatennens called Macron “hypocritical,” saying he fought against the lifting of patents on vaccines to serve his friends with money and pharmaceutical laboratories. “France voted AGAINST at the World Trade Organization!#Biden inspires you? Perfect: tax the rich,” he said. Jean Luc Melenchon, the head of the La France Insoumise party, said on Twitter: “Biden speaks and the Europeans applaud. Even after voting against free licenses on vaccines. Eh Macron.” Meanwhile, Macron also announced opening up vaccination for all adults from May 12, depending on the availability of vaccines, instead of the previous date of June 15. He said if there is no turnout for the scheduled appointments, then such slots will be open to adults. Those above 50 years can also register for a shot from May 10.
bakutribune.com
VIDEO