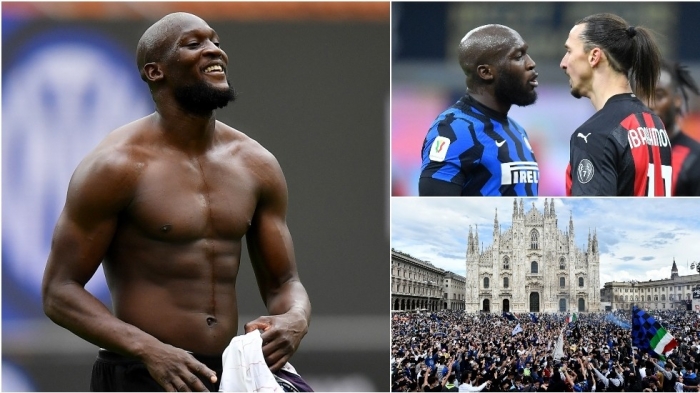 SHARE: READ: 176     10:19     04 May 2021
I nter Milan forward Romelu Lukaku took a swipe at AC Milan rival Zlatan Ibrahimovic after the big Belgian claimed bragging rights as his team won a first Serie A title since 2010. Inter were crowned champions on Sunday after nearest rivals Atalanta could only draw with Sassuolo, handing Antonio Conte’s team a long-awaited Scudetto and sparking joyous scenes on the streets of the Italian city. The title for Inter is their 19th Scudetto overall but the first since they won a Serie A, Coppa Italia and Champions League treble under Jose Mourinho in the 2009-10 season. Since then, they have been forced to watch city rivals AC Milan lift the Serie A crown once before Turin giants Juventus went on a run of nine straight triumphs. Striker Lukaku has been a crucial force in Inter’s success, hitting 21 goals in 33 games this campaign as well as laying on nine assists. For Lukaku, Inter’s title success is even sweeter after the running personal battle he has waged with AC Milan’s Swedish icon Ibrahimovic. The pair clashed furiously during the Coppa Italia quarterfinal derby in January when they butted heads and exchanged words, with Ibrahimovic appearing to tell Lukaku to “go do your voodoo sh*t” in a reference to a story dating back to his days with Everton in the English Premier League. Lukaku responded by screaming “f*ck you and your wife, you little b*tch” as he was held back by his teammates. When the teams met in February, Lukaku was on the scoresheet as Inter romped to a 3-0 win and was heard exclaiming “I told you” – in what was taken as another riposte to Ibrahimovic. But after sealing bragging rights on Sunday, Lukaku issued a withering new barb to his rival on Twitter. “The real god has crowned the king! Now bow down! King of Milano,” tweeted the forward. Lukaku and Ibrahimovic – who are former teammates from their time at Manchester United – have been stoking their rivalry ever since the 39-year-old Swede returned to Italy at the end of 2019, which was touted as being “the return of the king.” After Inter beat their San Siro neighbors in a 4-2 thriller in February of 2020 – with Lukaku netting an injury-time strike to seal the victory – the Belgian poured scorn on the idea of Ibrahimovic being royalty, instead proclaiming on Twitter “there’s a new king in town.” Not content to let that lie, Ibrahimovic fired back after he scored a double against Inter in their Serie A clash in October, tweeting a picture of himself and the message: “Milan never had a king, only a God.” At the start of the season Ibrahimovic looked the likelier to win his ugly personal war with Lukaku as Milan made a strong start to their campaign, going unbeaten in Serie A all the way until January 6, when they lost to Juventus. But marshalled by the irrepressible Conte in the dugout, Inter gained momentum and never looked back after going top of the table on February 14, leading the standings ever since. With four matches to go, Inter have an unassailable 13-point gap ahead of Atalanta, AC Milan and Juventus – all of whom are level on 69 points. Lukaku has enjoyed another impressive season and has now netted 61 goals across 92 appearances in all competitions for Inter since making the move from Manchester United in August 2019 for a reported fee of €80 million ($96.5 million). Such has been Lukaku’s form, he has been linked with a move back to the Premier League with former club Chelsea said to be interested in potentially bringing him back to Stamford Bridge. Ibrahimovic, meanwhile, has penned a one-year extension with Milan to keep him at the club next season, when he will turn 40. The Swede, whose own peripatetic career led him to a spell at Inter between 2006 and 2009, will at least have the chance to return the crown snatched from his head by young claimant Lukaku.
bakutribune.com
VIDEO