Reign of terror. France must recollect her bloody past 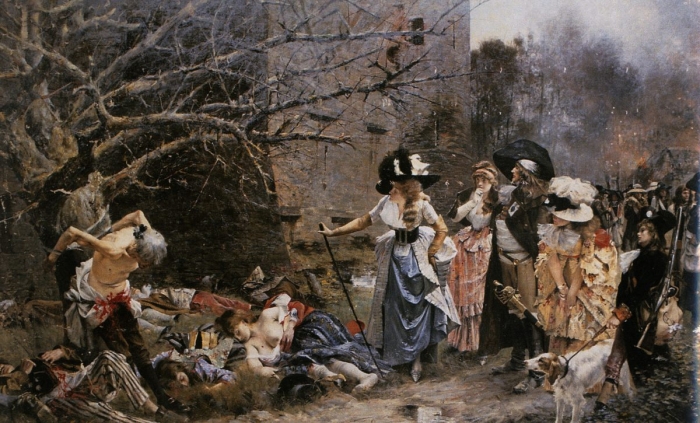 SHARE: READ: 341     23:13     01 May 2021
T he tension and misunderstanding always dominated in the bilateral relations between France and Turkey. Because of France and its leaders, sides could not establish ties, that would have relied on mutual trust and full absence of misbelief. France, having taken the side of Armenia in her aggressive war against Azerbaijan, factually supported Armenia's unfair and predatory claims on Azerbaijan's historical territories. And as the concomitant process France started to support Armenia's claims against Turkey in committing of so-called "genocide", that as Armenians claim, was "committed" by Turks in 1915. What about the claim, connected with so-called "Armenian genocide" it's clear, that there wasn't that. "Genocide" is only the tool, leverage of pressure, destined to prevent or hinder the strengthening of Turkey and not let her turn into superpower. But all these measures in unfair game against Turkey failed. Turkey has already become one of the mightiest states on the political map of the world solving all problematical issues at her agenda partly by economical impact, and partly where it is urgently needed relying on military power. Already in 2019 President of Turkish Republic Mr.Rajab Tayyip Erdogan foreseen the escalation of the tensions between his country and France amid the new period of the crisis in relationships with Paris. Then Mr.Erdogan did frequently remind to France's newly elected president Emmanuel Macron what the fathers of modern French people had really done with the population of occupied Muslim countries. The French invasion and conquest of peaceful Islamic nations was accompanied with unseen cruelty. The French established their rule their through terror, massacre and mass slaughter of millions of innocent Muslims. So in one of his interviews to local Turkish journalists of "HABER" agency Erdogan said: "In 1793-1796 French government organized the massacre of nearly 600 000 catholics in Vandee. And as American historian Reynold Sheer claims, France did commit the first genocide in modern history. In 1830 during the occupation of Algeria French armies showed no mercy of local population. In 1839 Gabon was turned by French government into slave trading center in Africa. In 1840 after the occupation of Senegal they started forcibly to convert local Muslims into Christians. The rebellions during 1860-1904 in Benin were drowned in blood. 1881-1884, again Algeria, during anti-French rebellion were killed thousands of innocent Muslims. 1881, Tunisia was occupied by France and the French government banned the Islamic in Arabic, imposing the French system. The same was done by the French in 1896 in Ghana". Also Mr. President spoke about non-Muslim countries where the French had left a profound bloody legacy: "1872-1954, Vietnam, the French mercilessly butchered more than 500 000 Vietnamese". At last Mr.Erdogan reminded of his meeting with E.Macron after he had been elected the President: "I told him, that he was new in politics. And recommended him to scrutinize its history. He denied, saying "no, there is nothing like this in our history". But now I'm teaching him the real history, what did really do his ancestors". So all these examples are showing that the French, their previous governments, existed in history, are guilty in ghastly crimes against those, who France had occupied during colonization period. And instead of looking for a straw in someone else's eye for France it will be much more reasonable to try to put out log from its own eye, to acknowledge its terroristic and barbaric past, repent for all crimes against Muslims and pay contribution. The author is Kerim Sultanov
(If you want to contribute and have specific expertise, please contact us at [email protected])
bakutribune.com
VIDEO