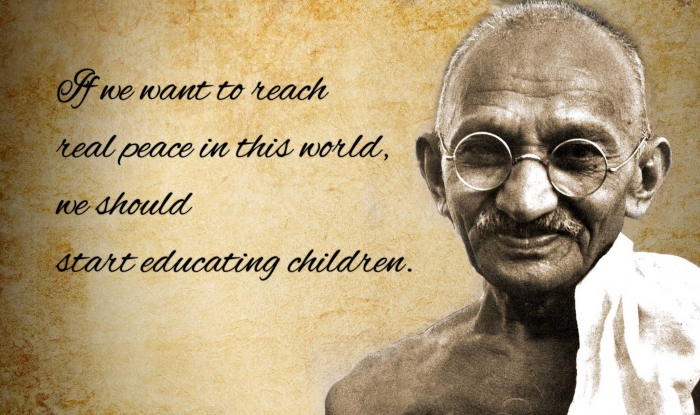 SHARE: READ: 630     12:30     30 April 2021
R ecently the monument to Mahatma Ghandi in Yerevan became the object of vandalism. The memorial to this one of the greatest Indian historical figures and fighters for independence of his motherland and, hence, the justice, had been erected in the park at the intersection of Alabyan and Markaryan streets in Yerevan previous year. Yerevan's city authorities then denied the proposal to erect Gandi's monument on their own financial resouces. That's why the memorial appeared on the money of Indian government. Just three days passed after the monument had been pelted with eggs by the participants of anti-Indian demonstration in Yerevan on April 26th, today a new much more awful and staggering news shocked all advanced democratically-minded forces in the world - Armenians burnt the monument. It's already been destroyed by flame, purposefully made by Armenian nationalists. Now Armenians after they faced a nearly crushing defeat during a new aggressive war against Azerbaijan in 2020, are engulfed with wrath against almost all the humanity. Simultaneously the 78 years old US president Joseph Biden, maybe even not knowing what he was doing or what document signing, during his speech on 24th of April said that so-called Armenian "genocide" had taken the place and had been implemented by the authorities of the Ottoman Empire in the year of 1915. But why has Gandi's monument in the capital of Armenia been burnt? Which ties does this great man of mankind's history has got with all this story, and Armenians especially? The respond to this question is much more simple than one might think: there is an interesting and, furthermore, an important fact from the biography of Gandi is that this one of the most outstanding democrats and patriots during his conscious life rejected the Armenian lie and especially denied to acknowledge the so-called Armenian "genocide", that, as only Armenians and their "historians" claim, occured in Ottoman Empire in 1915. So who was great Gandhi? Mohandas Karamchand Gandhi (1869-1948) was an Indian lawyer, political activist, who waged non-violent peaceful straggle for the independence of his country - India - from British Empire. Soon after he had headed the anticolonialist movement in India Gandhi whould get a new sobrique by his large-scale followers - venerably titled as Mahatma - which means "great-souled". Under this name Gandhi would go down in history. Gandhi was a very popular figure among both Indian Hindus and Muslims, uniting these two the biggest religious groups of his country. He had one a very sacred goal - to prevent nonsensical violence and tension between Hindus and Muslims, that was the policy and the legacy of the rule of the British. Additionally Mohandas Gandhi was on turkish side in Mustafa Kemal's struggle against Antanta states - Great Britain and France. What about the calls previously, exactly before the monument to Gandhi was objected by Armenian nationalist groups, lots of Armenian politicians had done serious statements provoking the governmet to dismantle the statue of Mohandas. Furthermore no official opening ceremony of the monumet has still been held. So the fact of burning of the monument of one of the greatest Indians in the world shows that the leadership of Armenia is unable to govern the country, its people. Because the country has chosen the path of its own degradation, not development.
(If you want to contribute and have specific expertise, please contact us at [email protected])
bakutribune.com
VIDEO