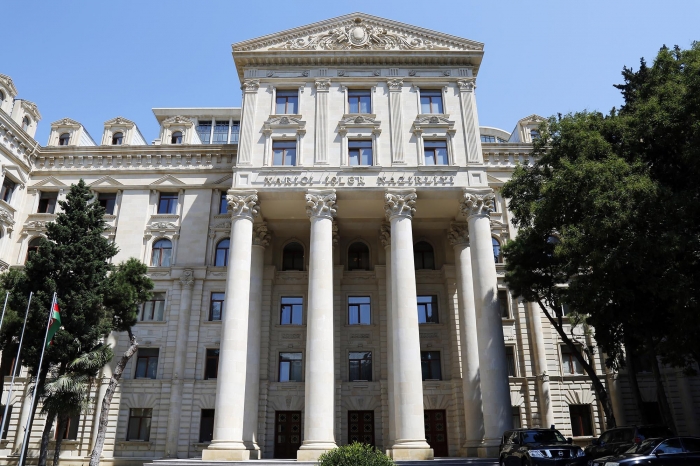 SHARE: READ: 102     10:50     18 April 2021
T he Ministry of Foreign Affairs of the Republic of Azerbaijan issued a statement on 18 April - International Day for Monuments and Sites. The statement reads as follows: "Today is celebrated as the International Day for Monuments and Sites. On this occasion, Azerbaijan repeats its grave concern regarding the destruction of its cultural heritage by Armenia in the liberated territories. Almost all historical, cultural and religious monuments were completely destroyed during the period of occupation. As of today, the Ministry of Culture of Azerbaijan has identified more than 400 monuments that have been destroyed in the liberated territories. The total number of the monuments in these territories is up to 3000. Cultural and religious property belonging to Azerbaijan has been looted, desecrated, altered and illegally exported to Armenia. 22 museums and museum branches with over 100,000 artefacts in the liberated territories have been destroyed. Artefacts and ancient manuscripts of 13th century Khudavang monastery situated in Kalbajar district, as well as precious artefacts found during illegal archaeological excavations near Shahbulag fortress of Aghdam district were illegally transported to Armenia. Besides that, illegal excavations have been conducted in Azikh cave in Azikh village of Khojavend region. All of these actions constitute a gross violation of international humanitarian law, including the UNESCO standard setting instruments, such as 1954 Hague Convention and its two protocols, as well as the 1970 Convention. Regretfully, our appeals to the relevant international organizations to investigate war crimes including the deliberate destruction, misappropriation, alteration of our cultural heritage, as well as illicit removal of our cultural properties by Armenia have been ignored throughout the 30-year occupation. We welcome the interest now being shown in this respect. The cultural heritage situated in the territory of the Republic of Azerbaijan, regardless of its origin, whether secular or religious, reflects the cultural diversity of the people of Azerbaijan, which Azerbaijan values and protects. Ensuring that the unprecedented damage inflicted on Azerbaijani cultural heritage is fully assessed by an independent technical mission stands as a priority for the Government of Azerbaijan and Azerbaijan is closely cooperating with UNESCO in this regard".
bakutribune.com
VIDEO