What message did Ilham Aliyev send to the world community? 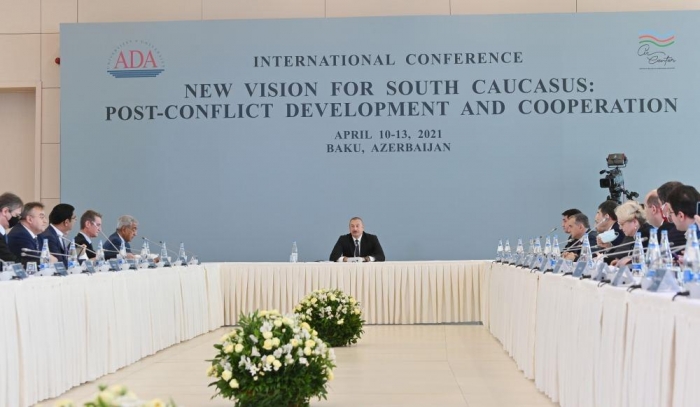 SHARE: READ: 368     23:18     17 April 2021
O n April 13, President of Azerbaijan Ilham Aliyev attended an international conference entitled "A New Look at the South Caucasus: Development and Cooperation after the Conflict" held at ADA University and answered questions from experts from world-renowned think tanks. For three hours, the President conveyed the realities of the region to the world's attention and sent important messages to Armenia and international actors. The large number of questions asked by foreign guests to President Ilham Aliyev was an indication of the great attention paid to the event. During the dialogue with world-renowned political scientists, Ilham Aliyev's decisive and open statement of Azerbaijan's point of view strengthened our country's position in the post-war period and led the international community to better understand the realities of peace in the Caucasus. President says that, Azerbaijan is ready for peace. Speaking about the importance of strengthening peace in the post-war period, the President noted that Azerbaijan is ready for peace, the need to look to the future, but the Armenian leadership has not yet made a statement on the possibility of a peace agreement. He noted: "We believe that the conflict is over”. The President also spoke about the role that the OSCE Minsk Group could play in the post-war period. He noted that the conflict has already been resolved, and in the new situation in the region, the organization can take steps to strengthen cooperation in the region. The President noted that he hoped that the OSCE Minsk Group would present its proposals for further peaceful settlement in the region. "I hope that the representatives of the Minsk Group will soon come to Azerbaijan with a number of proposals, and we will study these proposals carefully," he said. By the way, a few hours after President Ilham Aliyev called on the Minsk Group to strengthen peace in the region, the "awakened" group again made a bizarre statement. Thus, both the pre-war period and the current processes show that the Minsk Group acts more as an actor in the foreign policy interests of member states than as a peacekeeping organization. Warning to Armenia The President warned the revanchist forces in Armenia. At the same time, he said that Armenians have not known Azerbaijan well so far: "This is a completely new Azerbaijan, Armenia does not know us well. They thought they were at war with Azerbaijan in 1992. But Azerbaijan is different, the people are different, the society is different, the motivation is different. They thought we had forgotten, that in time everyone would be tired, no one would want a war. " Indeed, if we look at the challenges of the post-war period, it would be more acceptable for the revanchist forces in Armenia to think first of their societies. It's funny that the representatives of the state, whose statehood is now in question, and who for 30 years have not been able to defend their homes, states and borders, think about revanchism. Indirectly, Ilham Aliyev touched upon this issue in his speech on April 13 and asked the Armenians: "Armenia should clarify its status: is it a state, a fort-post, or a province?" Of course, we know very well why the conflict in the South Caucasus has remained frozen for all these years, and who is pursuing the goals in the Karabakh process today. This rhetorical question is, in fact, an indication that Azerbaijan is well aware of whose interests it faces in the post-war period. Today, we also see that despite the post-war period, Armenia, which has a public debt of more than $ 8 billion, is beginning to take steps to modernize its army rather than thinking about the social situation of its citizens. Of course, Armenia alone cannot find funds to modernize its army. It seems that Russia will continue to arm the Armenian army. Reconstruction works Speaking about the reconstruction work in the liberated territories, President Ilham Aliyev noted that Azerbaijan plans to complete major infrastructure projects in Karabakh within three years. He said Karabakh would play an important role in Azerbaijan's economy, non-energy sector and transport. In addition, at the conference, President Ilham Aliyev outlined the post-war point of view of Azerbaijan. In his speech on April 13 and answering questions, President Ilham Aliyev once again briefed the international community and leading experts from 15 countries on the latest situation in the region, noting that Azerbaijan is ready for peace and new cooperation. At a time when Armenia's information war against our country continues, the conference in Baku will help the world community, especially the political elites and communities of the participating countries to better understand the realities of the region. Prepared by political scientist, teacher of the Academy of Public Administration under the President of Azerbaijan Zaur Mammadov.
bakutribune.com
VIDEO