The hidden doctrine of Armenians regarding Russia 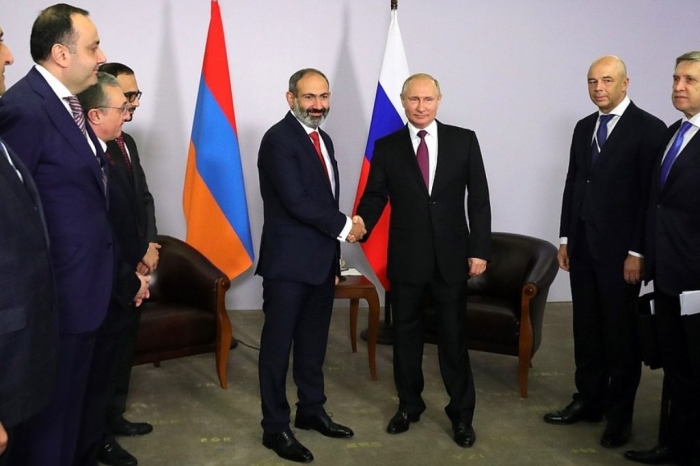 SHARE: READ: 397     03:03     30 March 2021
T he fact is that for about 100 years every year, as the dates of March 16 and October 13 approach, the world Armenians begin to prepare for the mourning associated with the signing in 1921 of the Moscow and Kars treaties, respectively. The world Armenians mourn this mourning no less than the mourning for all bandits, murderers and thugs who, through their own fault, were punished by the Ottoman government in 1915. Briefly convey the essence of these agreements, it boils down to the fact that Soviet Armenia was forced to abandon claims to foreign - Azerbaijani, Turkish and Georgian - lands, as well as withdraw its terrorist gangs from the territories of neighboring countries. The fact is that during the period of revolutionary confusion, the Armenians, taking advantage of the collapse of the Russian and Ottoman empires, attacked the historical lands of the Turks, Georgians and Azerbaijanis and, inflicting cruel and inhuman reprisals against the civilian population, captured them. But with the establishment of Soviet power in Armenia, terrorist gangs were liquidated and Armenia was forced to abandon its aggressive plans and policies. Every year before March 16 and October 13, the world Armenians remember and mourn the days when their aggression and seizures ended. But at the same time, for the first time in history, an Armenian statehood was formed, for which the Armenians should have been grateful to the Bolsheviks, and in a broader sense, the Russians. But the Armenians do not feel this feeling for the Russians. But back to the words of Anna Kostanyan. Pay attention to all the cynicism of this statement. On the one hand, it says that the Armenians should not forget the Moscow and Kars treaties, when Soviet Russia actually prevented Armenia from seizing foreign lands and continuing the policy of genocide of other peoples. On the other hand, she urges not to aggravate relations with Russia. Anna Kostanyan is simply one of those who aloud expresses thoughts that hover in the minds of the overwhelming majority of Armenians - Russia is an enemy that prevented the seizure of lands from other enemies - Turkey and Azerbaijan. But in the face of the Russians and out loud that Russia is the enemy should not be said, they believe in Yerevan. This statement alone already shows that the declared "partnership" and strategic "union" relations with Russia by Armenia are dictated by political expediency, rather than a sincere feeling of friendship and cooperation with Russia. Imagine speaking at the German Bundestag. A woman deputy comes to the rostrum and says: "We must not forget about how the Soviet Union defeated us in 1945. But it is also not worth reminding about this constantly, since now it is not profitable to quarrel with Russia. A favorable time will come, and we will remember everything to them." Or some French politician will remember how the Russian army defeated Napoleon, subsequently concluding the Vienna Agreement and the Holy Alliance, arguing that today it is not profitable to remember this, and the political situation is not favorable for this. It is from these positions that today's Armenian politicians relate to Russia. There is no need to speak of any sincerity in this case. Armenian politicians and ordinary people understand very well that today the situation in the country is not just difficult, it is difficult. And the Armenian society, albeit narrow-minded and politically illiterate, but politicized, realizes the irreversible perniciousness of an open speech against Russia. Although behind the scenes, the Armenian society is saturated and permeated with anti-Russian sentiments and Russophobia. There is simply no need to "escalate", as MP Anna Kostanyan suggests. Developing her thought on the topic further, Anna Kostanyan said: "We must not forget about the historical issue, but we must act out of today's security interests of Armenia." Again this is a historical issue, within the framework of which Russia is considered in Armenia to be the main culprit for preventing the creation of a "great Armenia". According to A. Kostanian, March 16 will expire 100 years since the signing of the Moscow Treaty, according to which Kars was "given" to Turkey, and Nakhichevan and Karabakh - under "temporary administration" to Azerbaijan, for a period of 100 years. "The government of Soviet Russia, headed by Lenin, concluded this agreement with the government of Turkey, headed by Ataturk. But at that time, this government was not internationally recognized, therefore, the agreement cannot have legal force." There is a deliberately Armenian distorted interpretation of historical facts. The documents refer to the "abandonment" of Kars as part of Turkey, and Karabakh and Nakhichevan as part of Azerbaijan, where Armenian gangs, taking advantage of anarchy, chaos and anarchy, massacred innocent civilians. But not about "transfer". As for the attitude of Armenia and Armenians to Russia, considering it, especially, in recent years, you understand that the attitude of Armenians is purely consumer and user-related, associated with such concepts as "make friends with the Russian", but do not let go of the club "," smile in the face of the Russian, but keep the gunpowder dry "and, perhaps, the most important thing -" be ready to stab the Russians in the back if the West is ready to come to the rescue. " These are the "allies" who talk about "friendship", but offer not to forgive and take revenge on the Russians at the opportunity for their alleged "betrayal" ...
(If you want to contribute and have specific expertise, please contact us at [email protected])
bakutribune.com
VIDEO