President Ilham Aliyev: Our celebrating Novruz in Shusha, on Jidir Duzu is a historic event 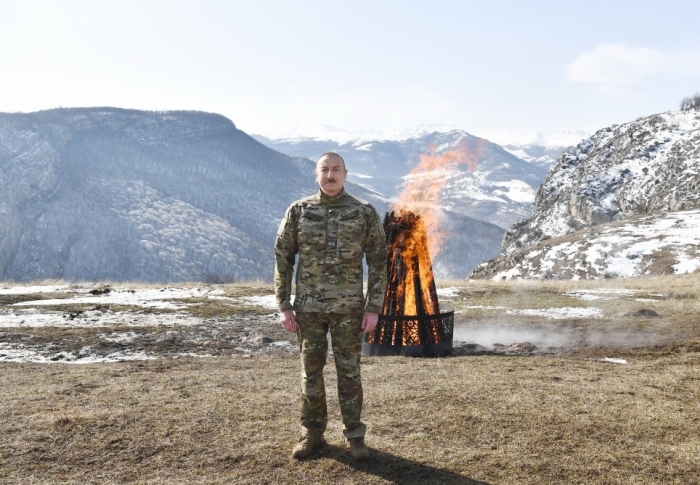 SHARE: READ: 136     10:50     20 March 2021
"Every year since 2004, when congratulating the people of Azerbaijan on the occasion of Novruz, I was saying that we would return to our ancestral lands. I was saying that we would restore the territorial integrity of our country. I was saying that we would celebrate Novruz in Karabakh after the liberation of our lands, and this day has come. Today we are celebrating Novruz in our ancient city Shusha, the cultural capital of Azerbaijan. This is a historic event. This is a great happiness. God heard the prayers of the Azerbaijani people. Every year, on the eve of Novruz, we probably all thought and said to each other that next year we would celebrate Novruz in Karabakh Inshallah, that we would celebrate Novruz in Shusha next year, and this day has come. After 28 years, we have returned to Shusha. We are celebrating Novruz in Jidir Duzu. We have restored historical justice." The head of state said: "On 8 November, when announcing the great news of the liberation of Shusha to the people of Azerbaijan, I said, “Shusha, you are free!” Today, we are celebrating our national holiday Novruz in free Shusha." "Shusha was held in captivity for 28 years. For 28 years, it was ruined and destroyed by the contemptible enemy. The historical appearance of Shusha was destroyed. The enemy wanted to Armenianize Shusha. They wanted to erase the heritage of the Azerbaijani people in Shusha. But they did not succeed in doing that. Shusha may have been destroyed, our historical sites in Shusha may have been destroyed by the loathsome enemy. However, Shusha did not bend. Shusha did not break. It preserved its dignity, protected the national spirit of Azerbaijan, and today, while in Shusha, we are witnessing this once again," the President added.
bakutribune.com
VIDEO