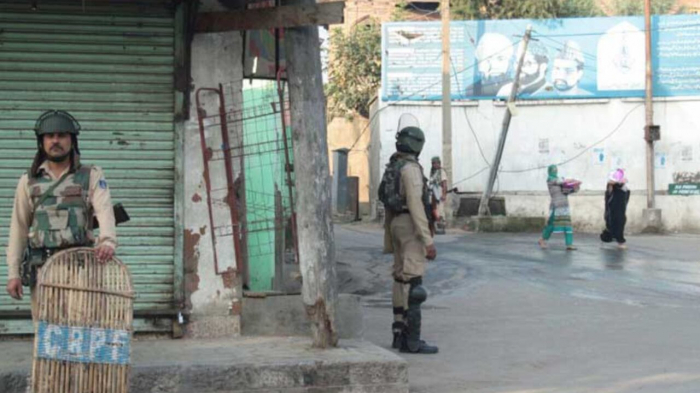 SHARE: READ: 176     10:03     22 June 2022
T he clampdown in occupied Kashmir by the BJP government that started in august 2019 has nearly completed its three years with life off from normal for 12.5 million Kashmiris. Since the doomed day people of Kashmir has suffered all form of humiliation, and repression together including mass killing, forced disappearances, torture rape, and also the list continues. Modi's government sees the problem of Kashmir solely through the prism of internal security or law and order. Hence, pellet guns that were termed non-lethal weapons by India are still in use against the unarmed Kashmiris to silence their voices against their illicit actions. The judiciary on the other hand is the tool that BJP is using to engineer its Hindutva ideology specifically in Kashmir. BJP is taking actions to alter the demographic structure and electoral boundaries within the occupied territory for “further marginalization of Kashmiri Muslims and suppressing their demand for freedom. The previous state was divided into the Union Territories of Ladakh and Jammu-Kashmir. This move was taken to market and unfold the Hindutva ideology within the illicitly occupied Muslim-majority area, because, it was thought of as a roadblock within the Hindutva project. The new electoral boundaries would further disempower, marginalize and divide the folks of the occupied territory. It might solely pave the means for putting in one more puppet regime backed by the BJP-RSS. Moreover, the BJP-RSS government intends to steer, even manipulate, political factors in its favor in total disregard of the aspirations of the people of Indian-Occupied Kashmir and United Nations resolutions. India has deliberately done the delimitation, so it will hold and win elections and decriminalize its illicit moves from 5 August 2019 to convert the globe of its devotion to the democratic values and processes. Modi’s attempt to impose Hindu dominion in Indian-Occupied Kashmir by political coercion, rigging the elections through a politically orientating redrawing of constituencies. However, the people of Indian-Occupied |Jammu, Kashmir, and its political leadership can outright reject any such attempt created by the Indian government. The universally accepted rule for delimitation of electoral constituencies is population, followed by the Indian government since its beginning as a parliamentary democracy. However, the BJP in Kashmir proposed using geography as a criterion. whereas, demarcating the boundaries of the latest assembly segments. Besides geography, the BJP and alternative Hindu-nationalist teams in Jammu demand alternative parameters like facilities of communication and the topography of the constituencies to be thought of. whereas redrawing the seats, which might tilt the numerical strength of the seats in favor of Jammu. In addition to this, post-August 5 Kashmir is being fully controlled and managed by New Delhi. Constitutional professional Subhash Kashyap has said; that the order was constitutionally sound and has no legal and constitutional fault in it. The Indian authorities are, thus, attempting hard to tailor public perception and narratives in step with their national interest. These days, solely those publications are allowed whose content is in line with the state narrative or about it. Journalists and editors who crossed red lines had to face the consequences of legal proceedings or harassment. Protests and persuasion by the Kashmiris generally cost their lives or were seen behind bars. The detention of award-winning Kashmiri human rights activist Khurram Parvez by India’s National Investigation Agency (NIA) is one such example. Yet, their morals are so high that they're able to face all the consequences but stand firm together before the autocracies of the BJP. It is out of frustration, anger, and revenge that the Indian forces are targeting Muslim Kashmiris because, despite their months of inhibitory and brutal actions, they failed to subdue their resistance in the valley. Kashmiri Muslims are fighting for their survival and are charged with religion and spirit, Indian forces are devoid of conviction and devotion. As an associate occupying army, they lack any possession with J&K and are told by their superiors that they solely would like land and not people. As a result, the morale of the Indian army is down as they're fighting a war they can not win. The heaven-like valley is being turned into a living hell by Indian security forces who unleash all brutalities on the far side record on Kashmiris. From time to time, it's seen that people are bolted in their homes below strict military curfews. Prominent Kashmiris leaders are in remission from time to time and placed into preventive detention. Basic facilities of life are taken back like the internet, phones, etc., and creating normal lives miserable. Kashmiri's acknowledged leader, Syed Ali Geelani, died peacefully at his residence at the age of ninety-two and his observance wasn't allowed to be taken out, and forcefully instructed to bury the body in the dead of night within an hour of death. He struggled all long his life for his people and their right to self-determination. His name can continually be remembered for his hardworking protracted struggles. The voice of Kashmiris can continually be raised against Indian armed brutality. No doubt, varied organizations are concerned during this mission. It's the need for time to bring key stakeholders from time to time to share ideas in making the environment for meaningful negotiations. Pakistan, India, the United Nations Security Council, and also the people of Kashmir stay the most actors. Being Muslims, we are going to continually air the aspect of our Kashmir brothers and keep fighting for her right to self-determination. Ahmed Saeed is freelance columnist based in Islamabad.
bakutribune.com
VIDEO