The gross hypocrisy and double standards of the European Parliament - VIDEO 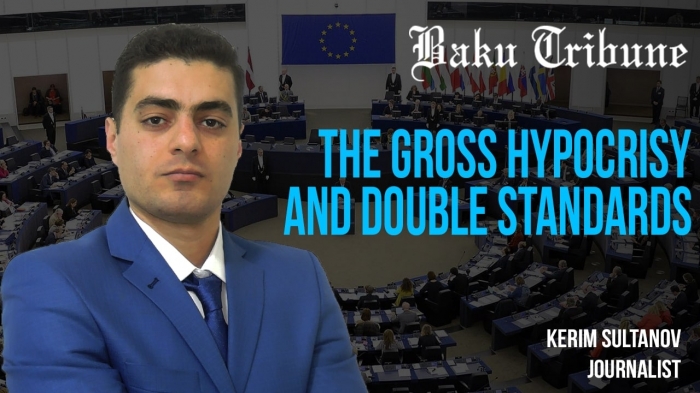 - VIDEO ">
SHARE: READ: 580     19:06     13 March 2022
E uropean Parliament has recently adopted a new resolution against Azerbaijan in which it strongly condemns Azerbaijan for continuing policy of erasing and denying the so-named Armenian cultural heritage in and around Nagorno-Karabakh. According to this biased document, this resolution in Karabakh region of Azerbaijan, supposedly the authorities of our country are going on fulfilling the policy of Armenophobia, destroying so-named Armenian cultural heritage. First of all it has to be stressed that there is no such kind of territorial-administrative unit as Nagorno-Karabakh. The Karabakh conflict has come to an end. It ended 2 years ago. And for Azerbaijan, for the people of Azerbaijan, for the authorities of Azerbaijan did come to an end, the conflict vanished. What about the second topic in this resolution, there is no destroying, no kind of erasing, or denying of Armenian cultural, or historical heritage in Karabakh. By the way all those temples, churches, that do exist in Karabakh region of Azerbaijan do belong to Caucasus Albanian kingdom, and were constructed and built by our direct ancestors who also did create one of the states in Azerbaijan - Caucasus Albanian kingdom. So another topic is that there are no evidence of Azerbaijan's violation, denying, destroying, purposefully ruining of so-named Armenian historical of cultural heritage. But on the other hand there are plenty of examples of Armenian policy of genocide, destruction, ruining and erasing of Azerbaijan's cultural heritage. Plenty, tens, hundreds of burnt villages, cities, desecrated mosques, graves, graveyards, that had belonged to Azerbaijanis. This is the example of Armenian barbarism, vandalism, of Azerbaijanophobia. So one of the most famous examples is the city of Agdam that is known to wide world as ghost town, the city that once was called as the Hiroshima of the Caucasus. So this is the policy of Armenia that could be called as the policy of Azerbaijanophobia, but not the policy of the authorities of Azerbaijan that could be called the policy of Armenophobia. According to the preliminary results of the monitoring conducted by the Ministry of Culture of Azerbaijan, there are 706 registered individuals and cultural monuments in the liberated territories. The monitoring results show that 95 percent of the dead monuments have been destroyed. The war between Armenia and Azerbaijan did come to an end 2 years ago. So why now European Parliament adopt the resolution where is stresses that Azerbaijan is violation, destroying or denying Armenian cultural heritage in Karabakh. We know the answer. The answer is Azerbaijan has not supported European, in wider meaning Wester policy of sanctions against Russia. The adoption of this biased document against Azerbaijan by 635 votes in favor of this document is the result of the policy of Azerbaijan in order not to accept the policy of the EU, EP and West of sanctions against Russia because of its conflict with Ukraine. The anti-Azerbaijani resolution has a political background This is the main measure in order to make pressure on Azerbaijan's side, the authorities of Azerbaijan in order to make us join the policy of sanctions against Russia. We're sure that they will not succeed in their black game against our country. This black policy, this unfair game of EU, of West will not succeed.
bakutribune.com
VIDEO